AVIA Security provides technological solutions for managing and controlling your population in emergencies. The company has a number of products that provide a suitable response to various threats, in various urban settings.

The system can be activated from anywhere in the world and connected to  regardless of the geographical location of the event or the event manager.

The emergency system improves the processing of information and shortens the time spent on  inspecting  houses during an emergency. It enables fast communication with residents and provides information in real-time with respect to events transpiring.

During routine times, the system is used as a tool for sending quick messages to residents to keep them updated  with respect to security / civilian events, which do not directly affect the residents' behavior. These messages can be dispatched from a cell phone or computer.

In addition, the system allows sending messages to specific groups that can be established.

Activating the emergency system relays a beeping sound to the residents' devices and informs them of an emergency event. The phones beep even if they are in "quiet" or "vibrate" mode.

Residents have an emergency reporting button and each resident can report their condition, and receive information from the various event managers in the emergency app.

The emergency system can be activated from any PC with a Chrome browser, and from any tablet using a dedicated application with Android system only. The head of security has his own tablet, in addition to the other capabilities, his location is visible on the map of the event managers.

Once the emergency system is activated fully or partially, the system records all actions performed in the system, by the residents or by the administrators.

The event log allows the various managers to be immediately updated on what is happening and allows them to  add relevant information to the event log. The event log is sectioned by color to make it easier for managers to understand the information and its source. At the end of each event a detailed report on the most recent event can be issued.

– Later it will be possible to view the event on a timeline and watch the event visually.

The system allows the administrators to issue a general message to all residents who are connected to the system who have an Android or iPhone smartphone. Each message sent to residents is visually updated on the event screen and portrays who has read the message.

Residents who are not connected to the system receive an SMS to their personal cell phone instead of a message via the app.

Event managers can communicate with each other through an internal chat. 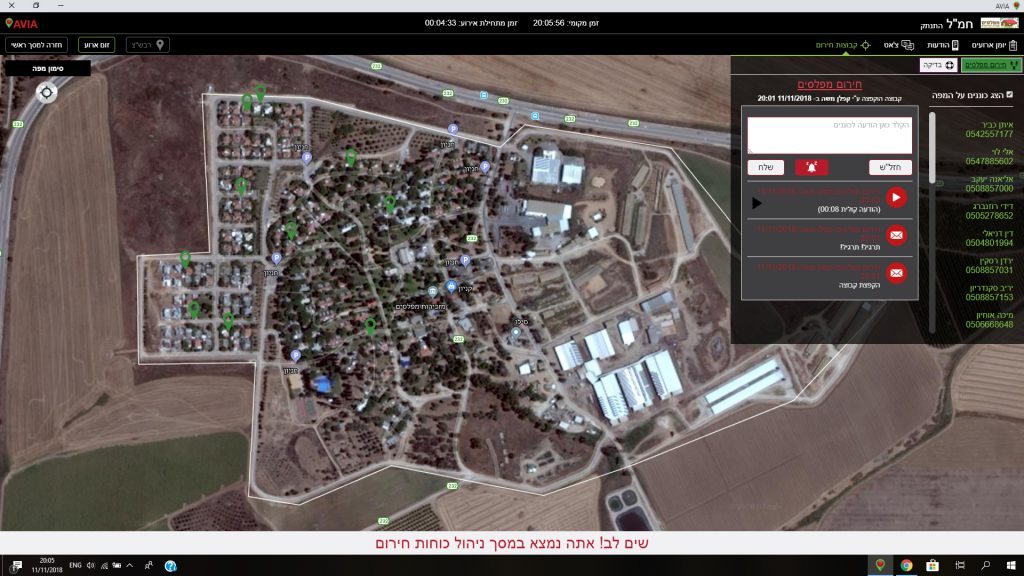 During an emergency event, a resident search can be performed through the Resident Search panel. The residents appear in the list according to the ABC, and are marked in the list according to the relevant status in which they appear. Residents who are not connected to the system and emergency force members are marked with another icon to differentiate them from the other residents.

In the main event screen you can add symbols / icons on the map and point out to all managers specific events. Each sign shows a different type of event / action / force.

Any user can press the emergency button and alert the head of security and the operations room. The relevant manager can recognize the location of the resident and listen to his audio recording.

Sending "culture and community" messages to users. These messages will be sent from the authorized manager's mobile device.

Dispatching the community and emergency forces from a cellphone

Culture and events feature for distributing events and flyers to residents

Overcoming every event with advanced technology.

During routine times is when one should prepare for a state of emergency.

The safety or your residents is our top priority – we believe it is yours too.

For your peace and quiet – use our solution.

Try our system for a trial period without any commitment.

We believe we have the best solution for you.

All rights reserved to AVIA SECURITY